Our lab has a long history of synthesizing nanoparticles that contain palladium, platinum, and gold. When Professor Yonezawa  began his research on the subject, the word “nanoparticle” did not even exist. As nanoparticles were often discussed at chemical engineering conferences (and still are), we focused on the “liquid reduction process” and obtained nanoparticles as a dispersion liquid.

Palladium chloride, chloroplatinic acid, chloroauric acid, silver nitrate, and rhodium chloride are often used as the noble metal salt. By resolving PVP as a stabilizing polymer, we can prepare a dispersion liquid of nanoparticles whose surface is protected by polyvinyl pyrrolidone (PVP). Each nanoparticle is thought to be protected as shown in the drawing on the left. Because the PVP is in contact with the nanoparticle at multiple points, the nanoparticle will not be destabilized unless the PVP is removed from all points simultaneously. Thus, polymer-stabilized nanoparticles are stable. 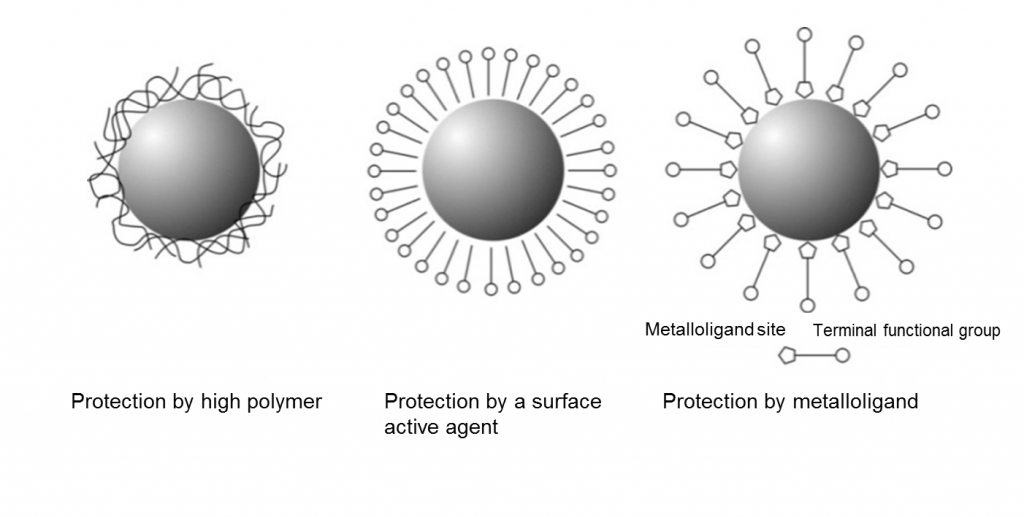 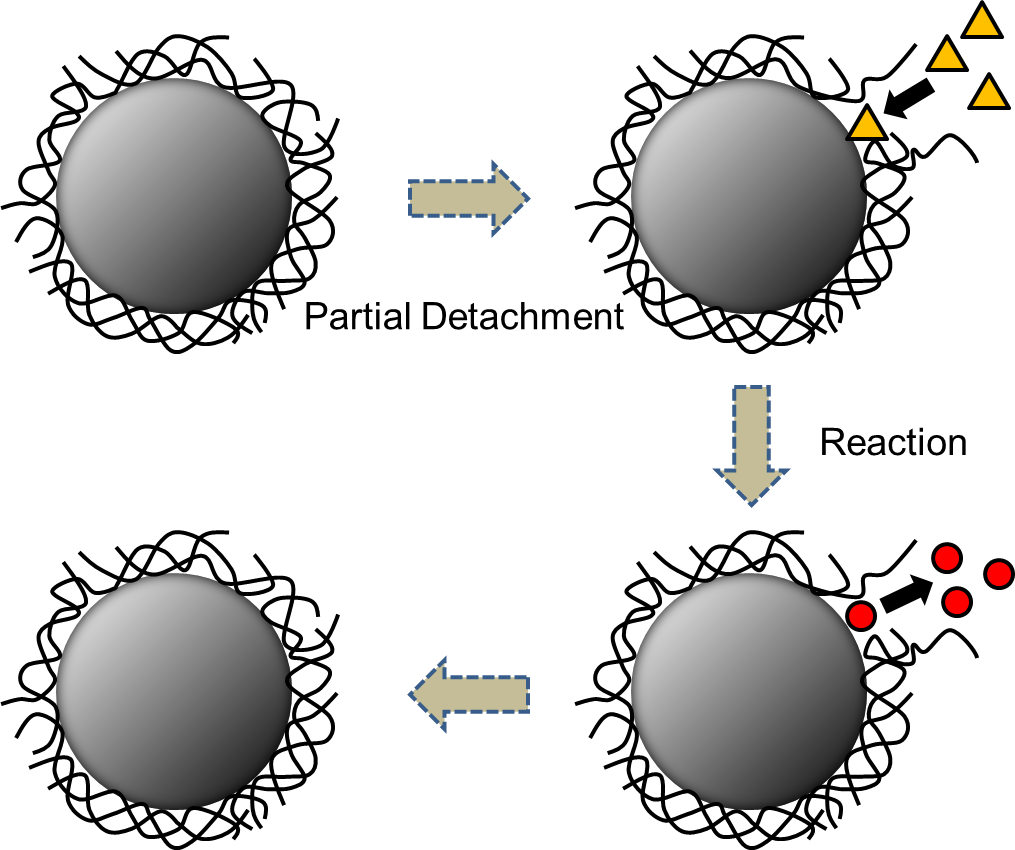 What happens if two metal salts are reduced simultaneously? Just like in a solid solution, one may expect two metal atoms to be disposed randomly; however, this was not the case in reality. In our research, we examined the simultaneous reductions of palladium and platinum. We used X-Ray diffraction (XRD), X-Ray photoemission spectroscopy (XPS), and extended X-ray absorption fine structure (EXAFS) spectroscopy for structural characterization. The XRD patterns of the alloy of these two metals significantly differed from the XRD patterns of the palladium or platinum nanoparticles. This result strongly indicates that a nanoparticle of the alloy contains the two metal atoms.

The chart below plots the reaction activity when the bimetallic nanoparticles are used as catalysts for hydrogenation. 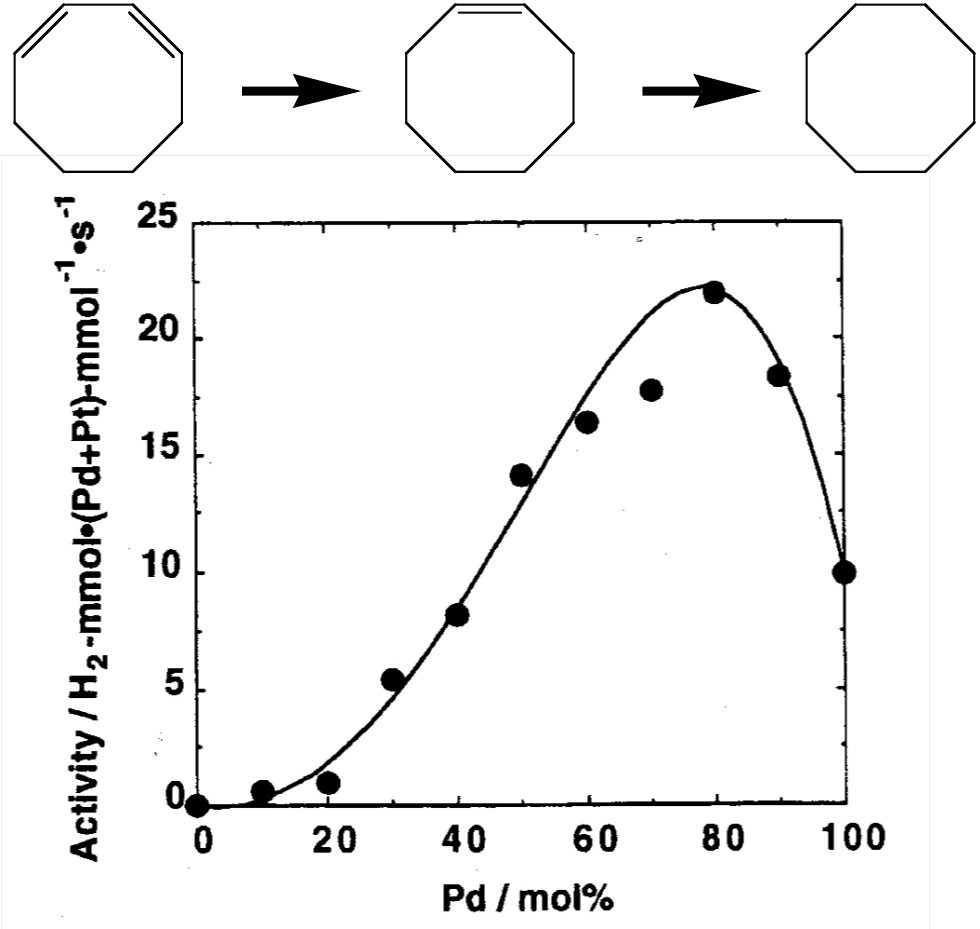 The bimetallic nanoparticles were observed to not only be useful for the partial hydrogenation of 1,3-cyclooctadiene, which is a conjugated diene, but also to exhibit the highest activity level when the palladium content was 80% (Document 1 and 2). The electronic state of the metals might have changed because of the bimetal formation; however, we must understand the detailed structure of the nanoparticles.

The XPS results indicate that for bimetallic nanoparticles of palladium and platinum, palladium lies on the surface. Therefore, we examined the structure in detail using an X-ray absorption spectrum (Document 3 and 4). Among these methods, EXAFS spectroscopy is capable of identifying the types of scattering elements existing around the absorbing element, coordination number, and distance between atoms.

A computation using these factors indicates that the bimetallic nanoparticle contains 55 metallic atoms, and the shape and atomic arrangement of each of the atoms suggest that the nanoparticle has a palladium-platinum core-shell structure. 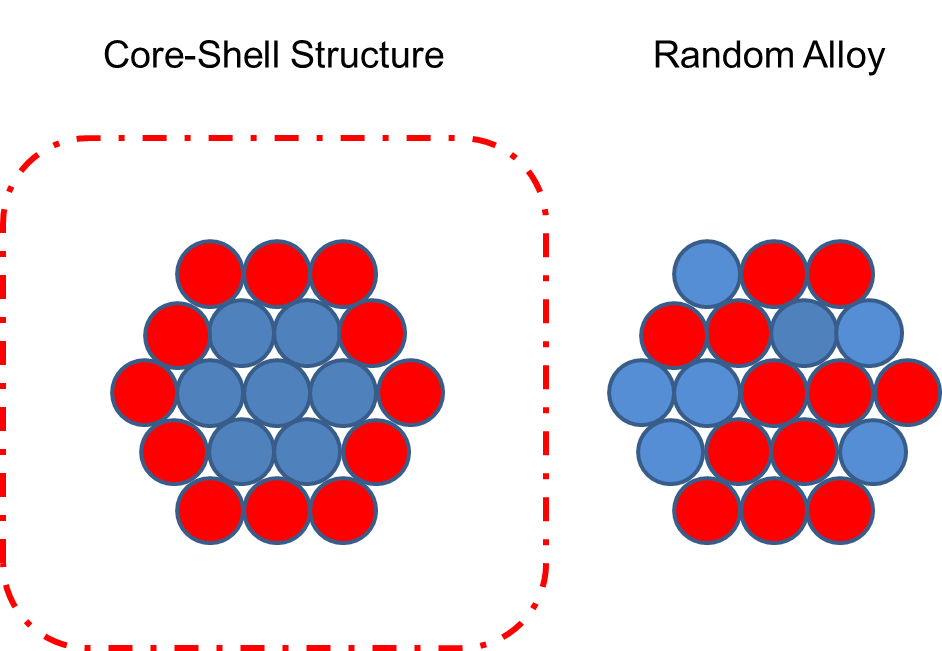 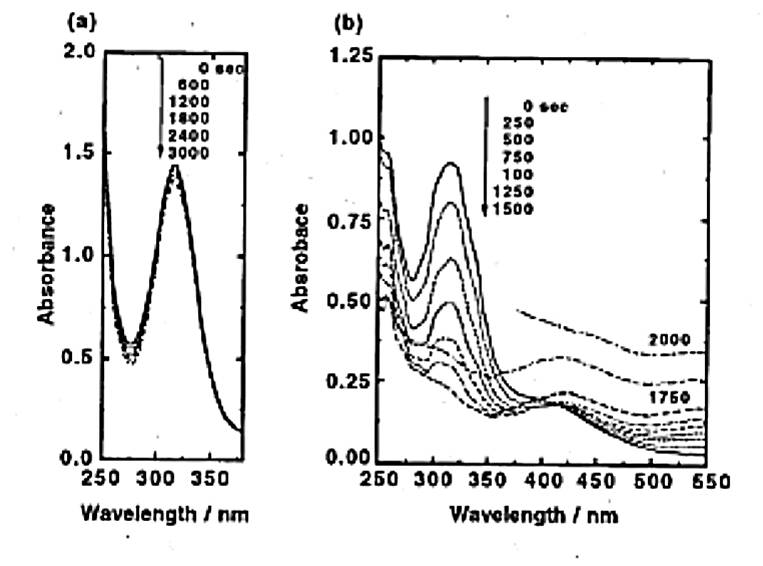 The figure shows that there is no variation in the peak of palladium until the reduction of gold is almost complete. This finding can be explained by the difference in the redox potential. However, another important factor is the “geared cycle.” The geared cycle refers to the mechanism in which the oxidation-reduction reaction seemingly proceeds like the meshing of gears. The case for the palladium-gold combination is illustrated below.

It has been observed, as explained above, that by alcohol reduction, core-shell bimetallic nanoparticles can be obtained.

In addition, we recently began the synthesis of octahedral particles (single crystal) with a consistent particle size and are making continuing efforts to examine their behavior. We are also designing and synthesizing fine particles and believe that the plasmon absorption effect can be applied in many areas.