In the research of nanoparticles, microscopy with a TEM is always used as an essential evaluation tool. Not only do bright-field images from heating TEM show the shapes and sizes of nanoparticles, the selected area electron diffraction (SAED) patterns and dark-field images are capable of indicating the crystal condition. In addition, the energy loss spectrum (EELS) and specific X-ray spectrum (EDX, EDS), which provide information such as the element assay, electron states of atoms, and information about the bonding state, are essential tools for detailed analysis of the microstructure, shapes, and conditions of nanoparticles. TEM specimens of nanoparticles and fine particles can usually be prepared by placing a sample solution on a TEM grid that is coated with a carbon film, as shown in the figure, and drying it. It is quite easy.

Because the microscope uses electrons, observation must be performed under high vacuum. To understand changes in the material, we used to make specimens before and after the changes and compare the two to infer the process and mechanism of the changes occurring. How incredible it would be if we were able to directly observe the transition process! Recently, to allow direct observation of the changes in the specimens, attachments to provide the user with means for atmosphere control, including control of the mechanical stress, electromagnetic field, or temperature as well as introduction of gas from outside, were introduced. Against this backdrop, our lab performs in-situ heating TEM of metal nanoparticles and fine particles.

In the in-situ heating TEM, we use a specimen holder with an attached filament heater, as shown in the figure. Observation is performed in a system such as the one in the figure below. The thin tube is provided to introduce gas from outside. Specimens are prepared by directly applying fine particles to the filament or by depositing carbon-coated nanoparticles on the filament, and the filament is heated by applying an electric current. Because only the filament is heated, the required heat capacity is small, and therefore, fast heating is possible. We performed in-situ heating TEM of nanoparticles and fine particles using a LaB6-type TEM (300 kV). The degree of vacuum in the TEM column is usually approximately 10−5 Pa; however, we introduced gas until the pressure decreased to approximately 10−3 Pa.

We synthesized Kompeito-type Pt nanoparticles using sodium polyacrylate. Such fine particles are highly likely to be used as catalysts or in fuel cells. Our lab performed in-situ heating TEM of the nanoparticles.

First, we heated the inside of the TEM column while maintaining the degree of vacuum at approximately 10−5 Pa without introducing a gas from outside. As a result, we observed regional contrast on the surfaces of the particles at 300 ˚C. The distinguished region is sodium polyacrylate, the surface stabilizer that is considered to have been converted to a carbide film. Then, until the temperature reached 700 ˚C, no changes in the shape were observed. When the temperature increased to 800 ˚C, significant changes began to occur; for example, the sharp corners of the particle started to change their shapes, and fusion among particles was observed at the contacting areas. In other words, until the carbide film is dissolved, no change occurs in the shape of the nanoparticles.

Such phenomena are reported, for example, in gold or silver nano rods that are protected by a cationic surfactant (P), and when the nanoparticle surface is coated with an organic matter and heated within the microscope, the organic matter forms a carbide film, thereby preventing heat-induced deformation of nanoparticles.

Much attention has been paid to “printed electronics,” which use printing technology to build electronic circuits with the use of a paste made of metallic fine particles or nanoparticles. The high-temperature behavior of nanoparticles used for this purpose is intriguing from the perspective of the study of annealing processes. Copper fine particles, unlike silver, require an organic coating layer to prevent surface oxidation.

Fine particles with a particle size of nearly 1 micron that were synthesized from copper sulfate with gelatin as a protective agent is an aggregate of copper particles with a particle size of several nanometers. When these fine particles are heated under vacuum at 3.5 x 10-5 Pa, the gelatin layer on their surface will remain a carbon layer and prevent particles from being annealed to one another until finally the copper will be sublimed (or evaporated) at such a high temperature that the carbon layer is dissolved. 6) This phenomenon is the same as that observed in Kompeito-type platinum nanoparticles.2) However, it is observed that if the TEM column is maintained in an oxygen atmosphere of 8 x 10−4 Pa, the gelatin coating of the surface will be burned off, and the nanoparticles will be annealed together, making the particle surface smooth. Furthermore, necking occurs at even higher temperature, annealing and connecting two particles. 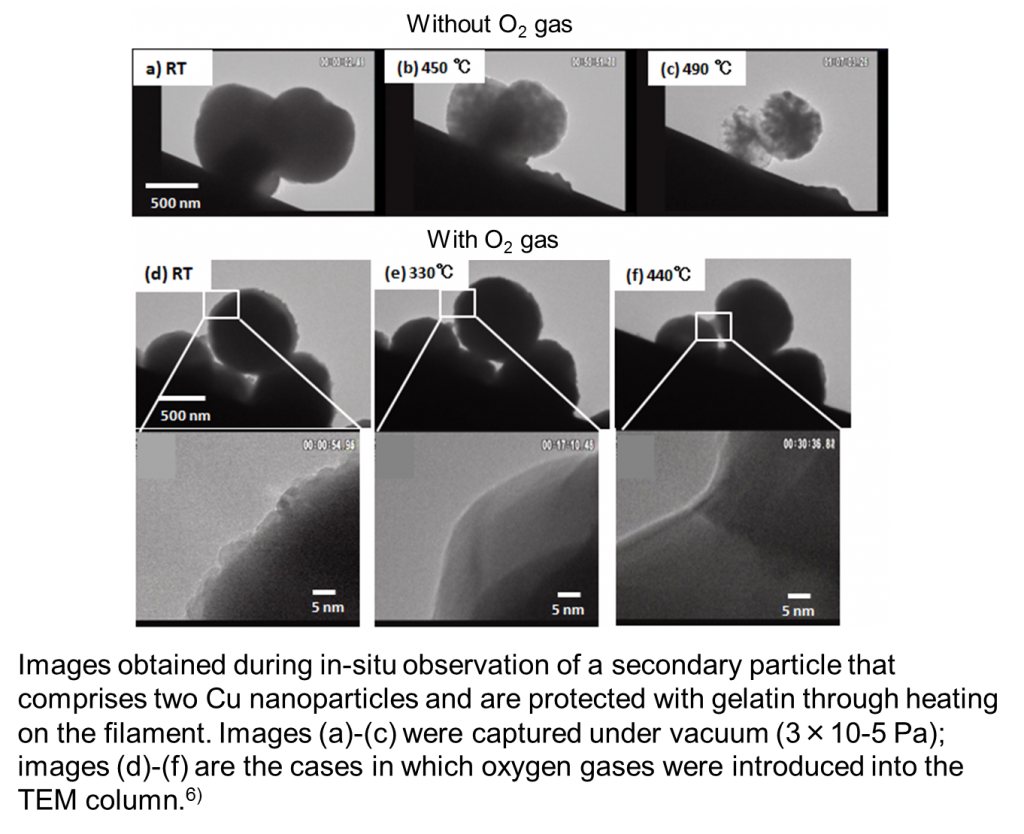 For the relatively large copper fine particles that were synthesized with CuO as a raw material and protected with gelatin, we observed that when the copper fine particles were heated in the TEM column by introducing oxygen to achieve a degree of vacuum of 4 x 10−3 Pa (4 x 10−1 Pa in the vicinity of the sample), Cu2O was produced at a temperature higher than 140 ˚C.7)

This result suggests that for annealing, controlling the oxygen content and temperature is important. Furthermore, we observed the redox feature, which is important for conductivity imparting, by in-situ heating TEM.8) 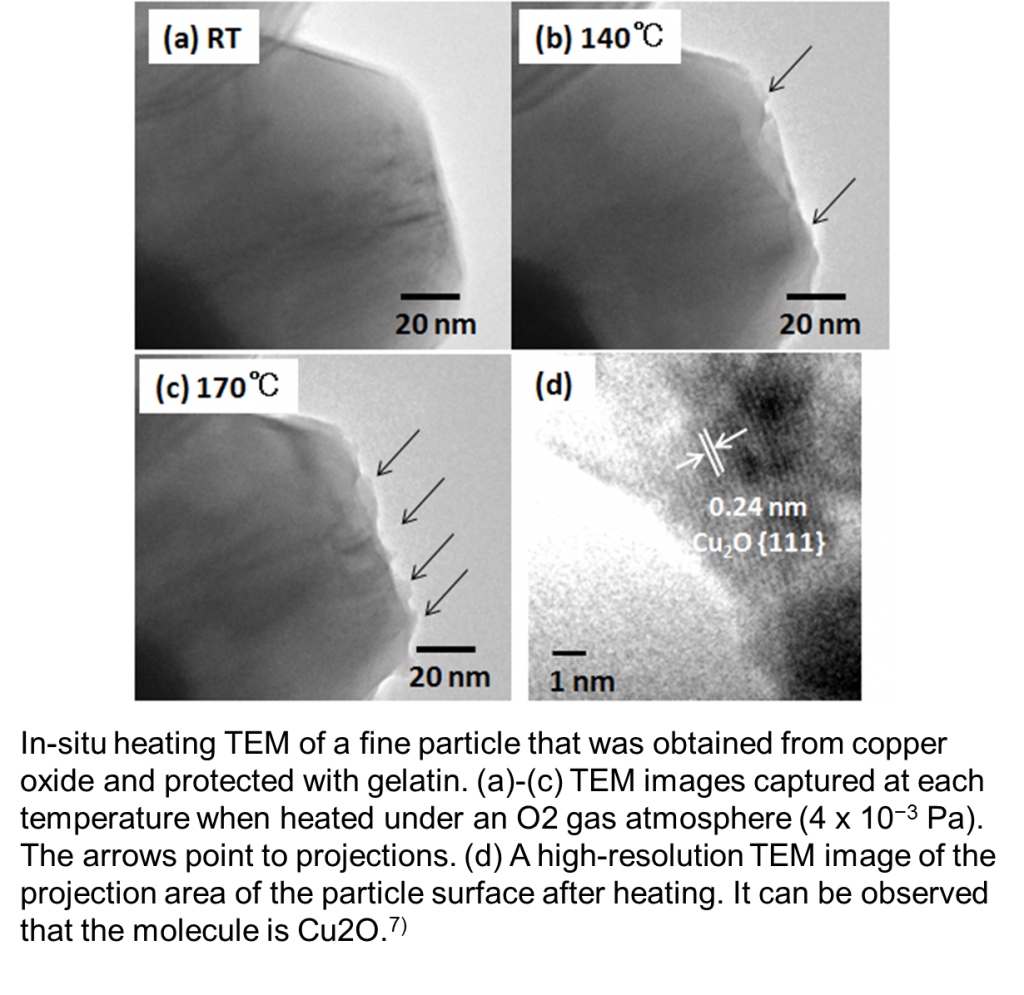 By reducing nickel after forming a nickel complex, we synthesized an urchin-type nickel nanoparticle, which is an aggregate of needle-like nickel. Generally, the synthesis of nanoparticles with an anisotropic structure requires a template such as a polymer; however, in this case, we were able to perform the synthesis without involving organic matters other than that in the solvent.

We performed in-situ heating TEM of the nanoparticles. When we introduced oxygen and achieved a degree of vacuum of 4 x 10−3 Pa (10−1 Pa in the vicinity of the samples) inside the TEM column, we observed a fine unevenness on the surface of the needle-like nickel at 350 ˚C. The unevenness is considered to have occurred because of the oxidation of nickel. However, when the degree of vacuum inside the TEM column was maintained at 3.5 x 10−5 Pa without introducing oxygen, the surfaces of the nanoparticles were not oxidized even at high temperatures, and naturally, a carbide film was not formed; a structural change was observed at approximately 350 ˚C. As you can see, if the synthesis is free of organic matters, changes in the metallic nanostructures can be observed at high temperatures. 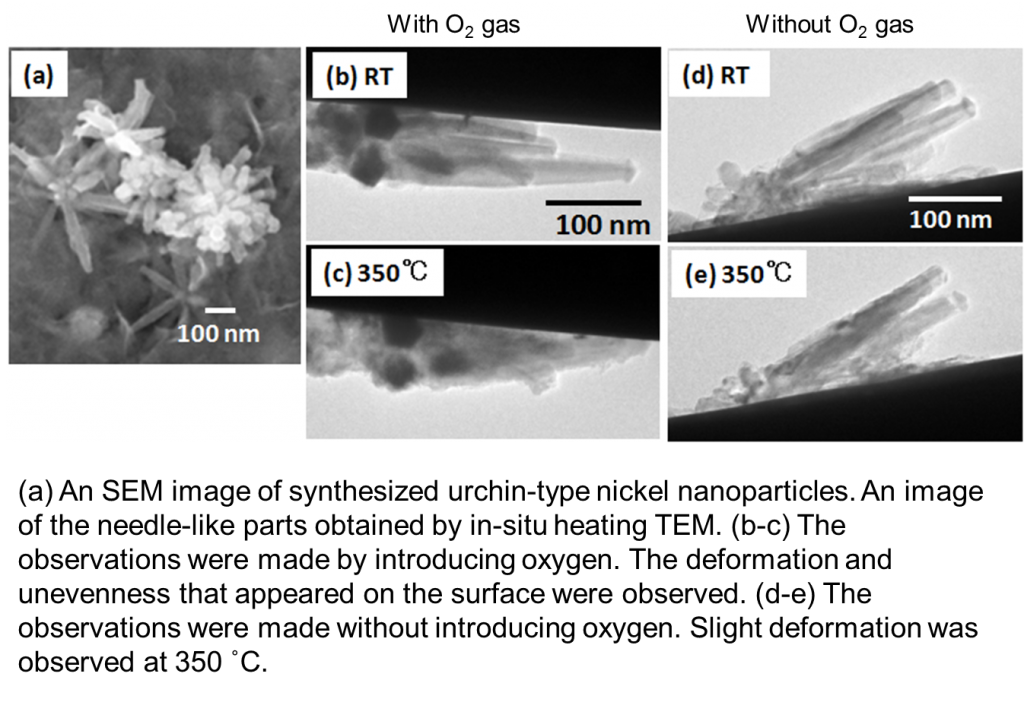 Determination of the melting point of silver nanoparticles

Furthermore, we performed in-situ heating TEM of silver nanoparticles. When we performed heating TEM observation of low-temperature annealing ink, organic matters on the surface ended up being carbonized, which was clearly observed in the TEM image. Therefore, we evaporated silver inside the electron microscope and deposited it as nanoparticles on the metallic oxide particles on the visible apart of the filament and observed them after applying heat.9) 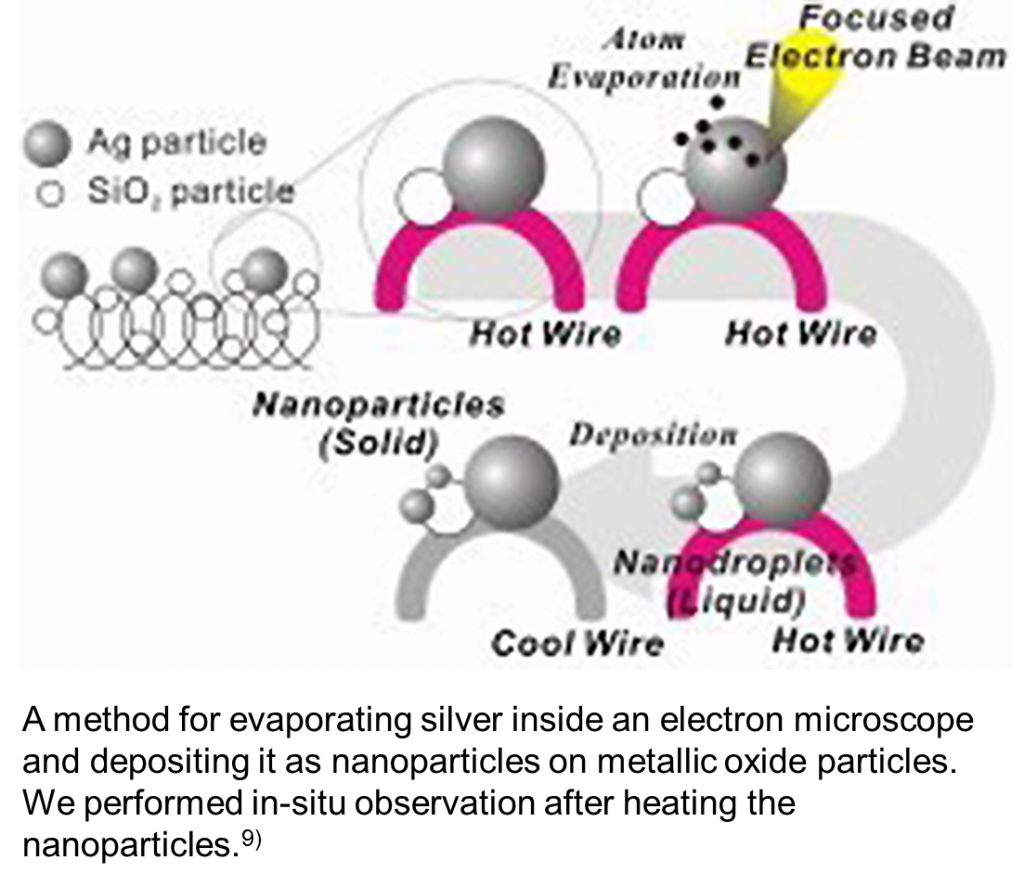 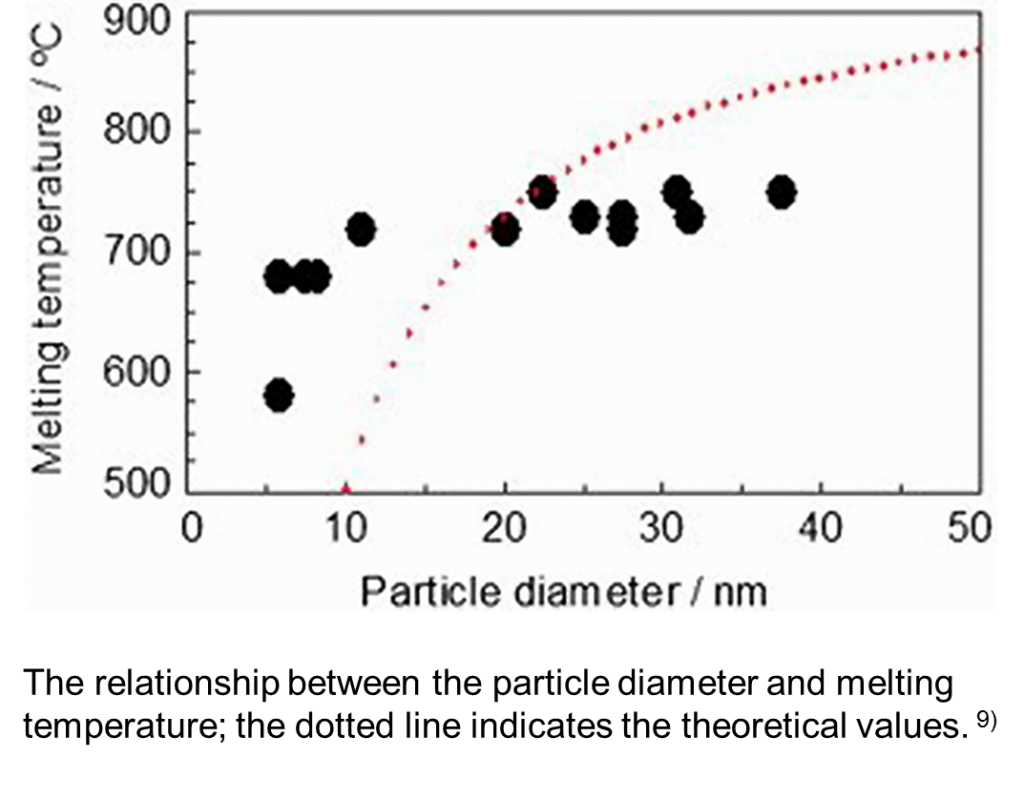