Recently, energy issues have become extremely important, and there is a desperate need for an effective means for utilizing sunlight as a primary energy source available to the Earth. The most promising of all the approaches is artificial photosynthesis, and global efforts have been made to realize its implementation.

The photosynthesis of natural plants is one of the most ideal photochemical reactions. It collects visible light very efficiently and achieves a light-energy exchange reaction with water as an electron donor. In the synthesis, the light-collecting system is able to perform highly efficient light energy transfer when molecules with appropriate properties are arranged and oriented in an appropriate manner. In a living body, proteins determine the properties of molecules and regulate their molecule arrangement and orientation. The question is can we artificially achieve a similar light-collecting function? 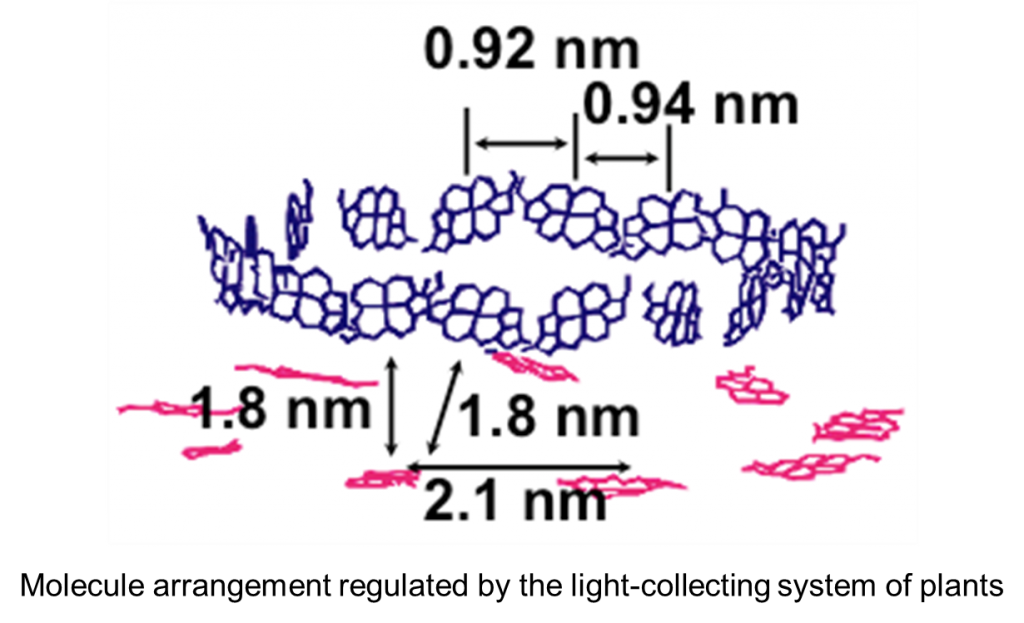 The molecule-arranging technique has been studied vigorously in recent years with the goal of building an artificial-light-harvesting system. For example, research using organic mesoporous silica as a host material and connecting porphyrin molecules in an annular manner has been reported. Meanwhile, we have controlled the molecule arrangement by taking a completely different approach. We used a nanosheet synthesized by hydrothermal reaction (chemically synthesized clay used as a transparent material) as a host material and combined function pigments into the surface of the nanosheet. The surface of the nanosheet is negatively charged, and positively charged pigments electrostatically adhere to it. In this complex, porphyrin molecules are arranged with a constant distance between them (2.4 nm), while adhering densely. At this time, porphyrin molecules do not associate at all with one another and have a similar excitation lifetime as monomers, and therefore, light chemical reactions, including energy transfer, are possible. 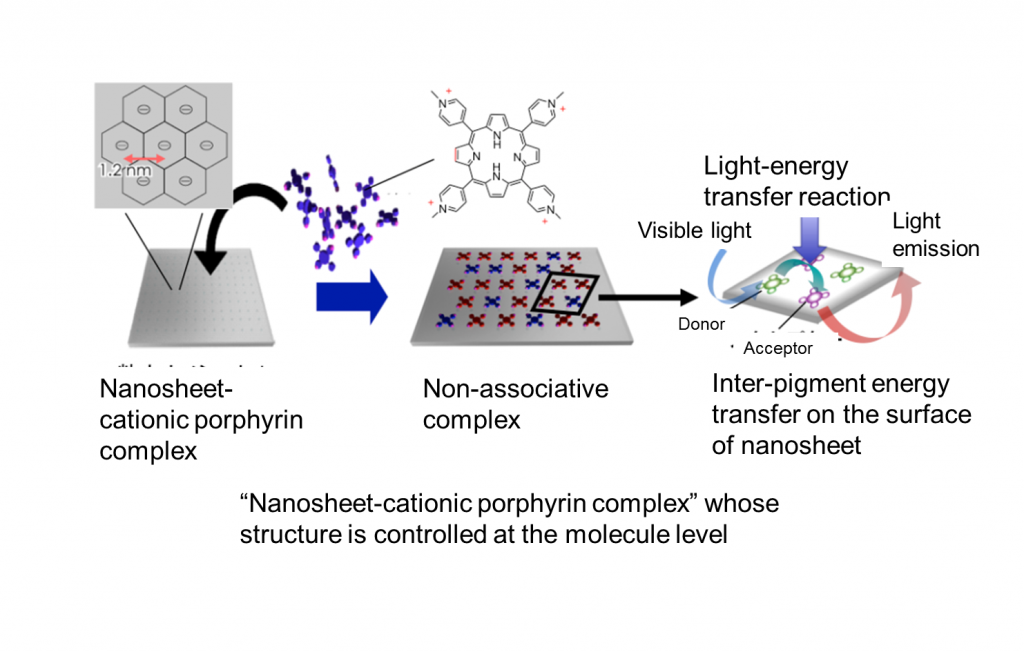 Because molecule arrangement in this complex is controlled using the interaction between the guest and host, the formation of complexes in which many types of pigments are mixed is possible. We believe it is possible to build an artificial-light-harvesting system that can make effective use of the entire range of wavelengths of sunlight using several pigments absorbing lights with different wavelengths and transferring them by light-energy transfer in stages (Figure 3). We are conducting research based on this belief. 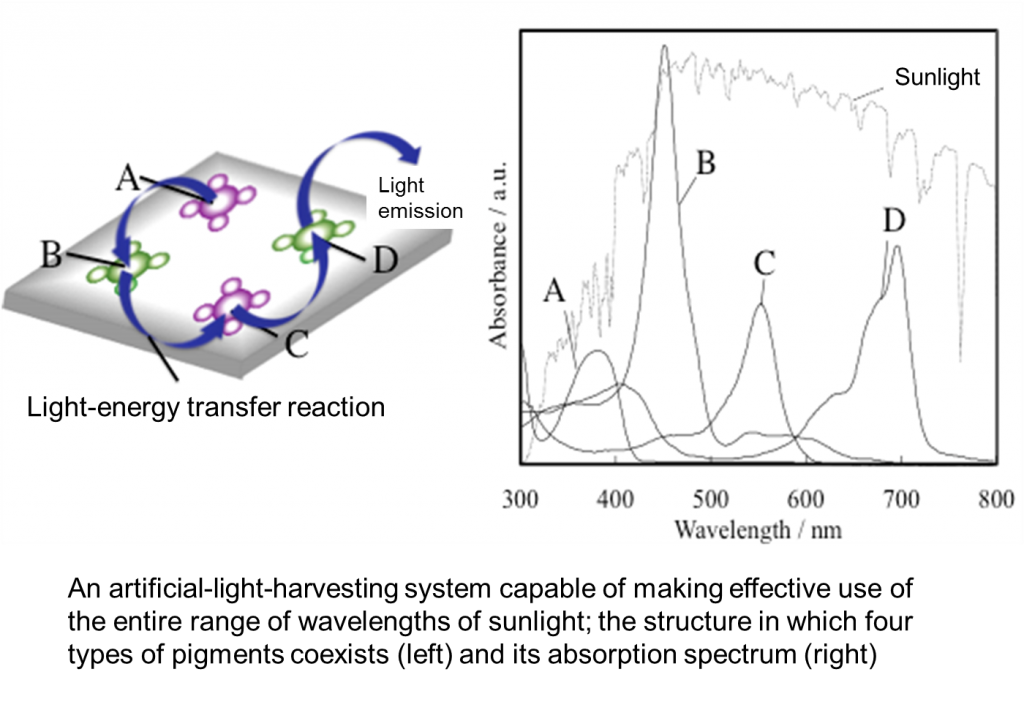 Examination using fluorescent measurements and time-resolution fluorescent measurements indicated that the light-energy transfer reaction proceeds at almost 100% efficiency between two types of porphyrin molecules. The result is exceptionally efficient among the preceding light-energy transfer systems that make use of self-organization. In addition, we performed detailed analysis on factors contributing to the 100% efficiency and observed that the following factors play significant roles: (1) the absorption structure of the two types of molecules on the nanosheet, (2) the control of the extinction process that reduces the efficiency of the light-energy transfer reaction, and (3) the force of guest-host interactions.

After establishing a theory behind the highly efficient light-energy transfer reaction on the surface of a solid, we built an artificial-light-harvesting model. We created a design and performed synthesis with the pigments shown in Figure 4 as light-harvesting pigments. We analyzed the light-energy transfer reaction between two pigments from the synthetically created light-harvesting pigments A-D and achieved high efficiencies (95-100%) in all combinations. Overlapping the absorption spectra of the pigments in Figure 4 yields the right graph of Figure 3, demonstrating the possibility of evenly harvesting the entire range of wavelengths of sunlight. We are currently engaged in building an artificial-light-harvesting system that employs a system using a mixture of these pigments. 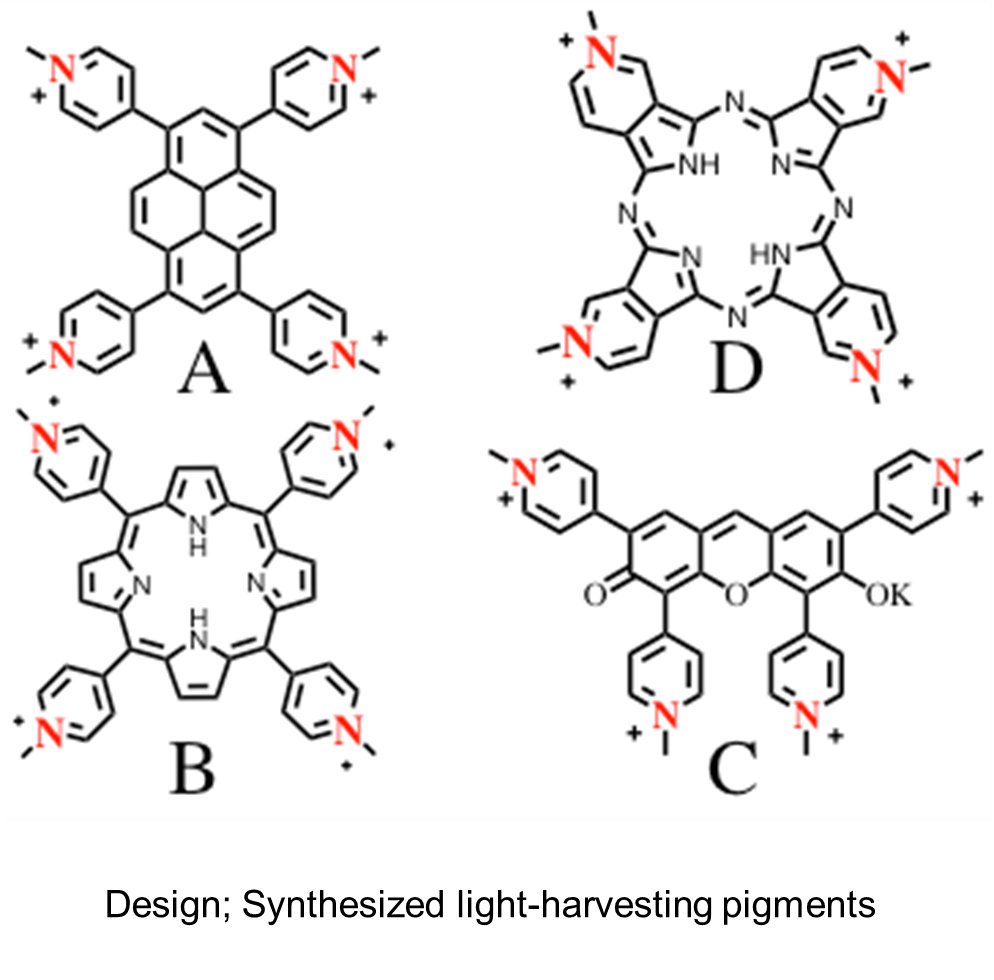